In Bangladesh, 21 February (Ekushey February) is observed as Language Movement Day, a national holiday. The Shaheed Minar monument was constructed near Dhaka Medical College in memory of the movement and its victims. In 1999, UNESCO declared 21 February as International Mother Language Day, in tribute to the Language Movement and the ethno-linguistic rights of people around the world.

The Bengali Language Movement (Bengali: ভাষা আন্দোলন Bhasha Andolôn) was a political movement in former East Bengal (renamed East Pakistan in 1956 and Bangladesh in 1971) advocating the recognition of the Bengali language as an official language of the then-Dominion of Pakistan in order to allow its use in government affairs, the continuation of its use as a medium of education, its use in media, currency and stamps, and to maintain its writing in the Bengali script.

When the Dominion of Pakistan was formed after the separation of the Indian subcontinent in 1947 when the British left, it was composed of various ethnic and linguistic groups, with the geographically non-contiguous East Bengal province having a mainly Bengali population. In 1948, the Government of the Dominion of Pakistan ordained Urdu as the sole national language, sparking extensive protests among the Bengali-speaking majority of East Bengal. Facing rising sectarian tensions and mass discontent with the new law, the government outlawed public meetings and rallies.
The students of the University of Dhaka and other political activists defied the law and organised a protest on 21 February 1952. The movement reached its climax when police killed student demonstrators on that day. The deaths provoked widespread civil unrest. After years of conflict, the central government relented and granted official status to the Bengali language in 1956.
The Language Movement catalysed the assertion of Bengali national identity in East Bengal and later East Pakistan, and became a forerunner to Bengali nationalist movements, including the 6-Point Movement and subsequently the Bangladesh Liberation War and the Bengali Language Implementation Act, 1987. Wikipedia
"Homage to all Language Martyrs of Bengali Language Movement".
Raising family and social awareness:
Follow my Facebook page
https://www.facebookcom/cgd0074/
Email :rsharia@gmail.com
#SayNotoDRUGS 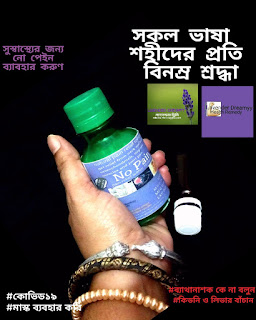